Honestly, nobody in the world likes mosquitoes. Mosquitoes are nasty bloodsuckers capable of bringing ruin to any outdoor event when they come around.

They have been in existence for some time now and different ways of dealing with them have been invented.  These tiny vampires keep growing in population despite the effort to terminate them.

Additionally, they do not just inflict pain on their victims; one bite from a female one could be deadly. The list is long starting from repellents, insect sprays, mosquito nets, mosquito magnets, and even mosquito bats. 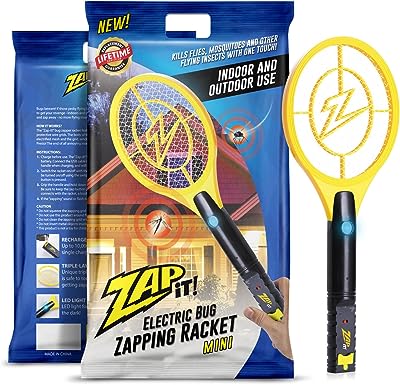 Our topic of interest, in this case, is the mosquito bat, which is a more advanced invention of dealing with mosquitoes. When functioning properly, a mosquito bat can singly curb an infection for an entire summer.

However, there are cases where the mosquito bat may break down and believe me you need to have it working before darkness creeps in.

The good thing is that it is easy to fix and will only take little time to have it working again. Similarly, every other device that is mechanical requires maintenance from time to time and the mosquito bat is not an exception.

In order for you to be able to repair or maintain a mosquito bat, you have to be familiar with how it functions.

Mosquito bats are also known as electronic mosquito zappers. They are usually designed similar to badminton rackets with a circular frame, which features a net woven over the frame.

Lately, we have the rechargeable ones and those that use replaceable AA batteries. The bat also has a handle which incorporates the electric circuit as well as a battery pack.

On the same note, the circular structure comes with a rather complicated design featuring multiple layers of the metal mesh where the mosquitoes are usually trapped.

The inner layer of the net structure consists of a high voltage source that originates from the circuit in the lower area of the handle an is referred to as “hot” mesh.

Outer layers are linked to the negative of the battery in the circuit and constitute a return path to the “hot” mesh line.

Now that the outer an the inner layers are separated from each other, the high voltage being harnessed in the central mesh cannot be arced-off through the other outer layer.

Thus, when a mosquito flies into the mesh, it creates a bridge between the two layers acting like a resistance path for the two layers.

The high voltage arcs through the mosquito’s body electrocuting it instantly.  This is how the mosquito bat works to kill these worthless insects.

All you need to open it up is a screwdriver.
Thus, begin by opening up the mosquito bat using the screwdriver.

Inside the bat, you will see an electric circuit which features diodes, a transformer, transistors, capacitors, resistors, and batteries.

Therefore in order to check if the components that form up the circuit are properly functioning, we will need to have a digital Multimeter.

This will help us in counter-checking the components for flaws. You have to be careful while using the digital Multimeter on the electric mesh.

Keeping the Multimeter directly on the mesh could result in damage to the meter or could shock you in worse cases.

Some the solution could be as easy as replacing the battery.

Usually, the mosquito bat is built with a 3V battery.

Thus, the multimeter should indicate some reading indicating some voltage. If this is not the case then the battery is either damaged or exhausted.

To test, touch one probe against another, a buzzer sound will be produced.

The advantage of switching the multimeter to continuity mode is that you can easily detect a short circuit.

For instance, if you test the diode and you happen to hear the buzzer sound then the diode is probably short-circuited or damaged.  Continue testing the rest of the components an note the damaged ones for replacement later.

Therefore, it is recommended that you check the transistor after having it removed.

Removing it can be done with the help of a soldering rode. Do not use the soldering rod if you have no prior experience, you could use another desoldering tool.

In the case of an NPN transistor, keep the black probe on the emitter while the red probe should be on the base. By doing this, the meter should indicate the value of resistance.

For the PNP transistor, the transistor should indicate “1” once the red probe and the black probe are placed on the emitter and the base respectively.

There reading should remain the same even when the probes are reversed. If the transistor passes this test then it is in perfect condition, otherwise, it is to be replaced.

You ought to take note of the number written in the transistor before going for a replacement. This is because the transistor is removed and the one being replaced should have the same number.

Moreover, the number is important since it indicates the type of transistor (whether it is NPN or PNP)

While doing this, keep one end of the capacitor with one probe and connect the other end to the other probe. Ensure that the meter is in continuity mode.

If the meter produces a buzzer sound then the capacitor is damaged and needs a replacement. Replace the capacitor with another which has a similar number of farads. Do the same thing for diodes.

If all the procedures are followed with maximum precision then the mosquito bat should be working correctly.